Following is information on my ancestors who fought in the United States Civil War.

Below are Civil War era pictures and letters between Isaac Follis, his wife, Elizabeth, their Son Tommy, their daughter Caroline, sister-in-law and mother-in-law..

How the family is structured:

Isaac and Elizabeth's daughters were Caroline Hanna and Sara Jane

Isaac's son, Thomas was also a private in the Civil War. The two men served at the same time  and company for a while and apparently were in the same location for at least a while because several letters have writing from both of them in the same letter.

Following are pictures of Isaac Follis, his wife Elizabeth Follis and their Son Tommy Follis.

This is Elizabeth and Isaac.  The two smaller pictures in the middle are: Top- Tommy.  Bottom- Isaac in their uniforms. 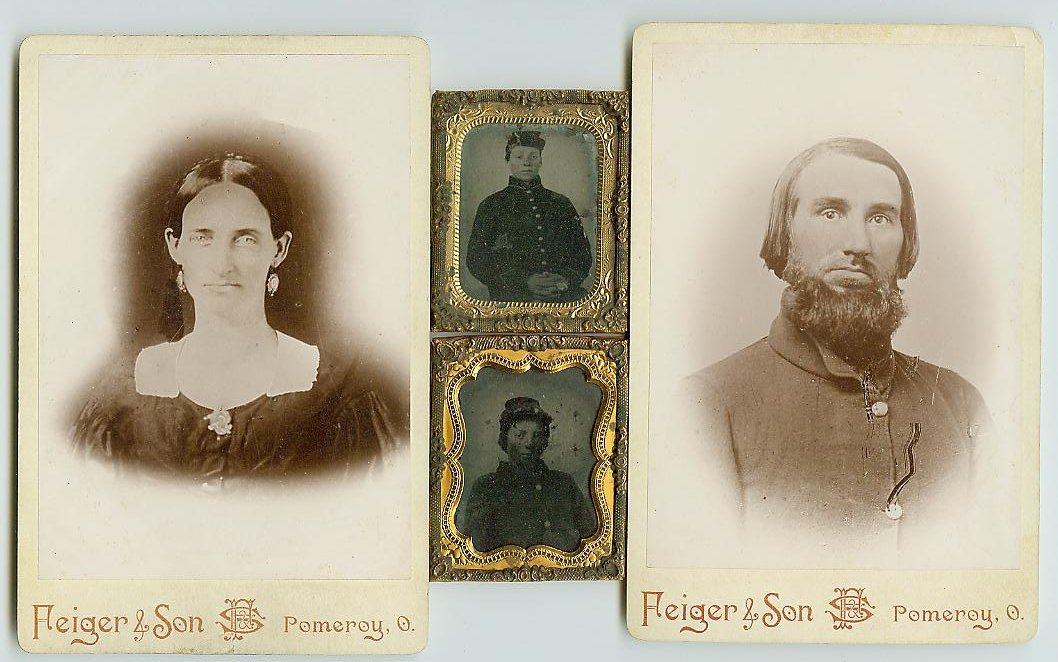 Following are links to PDF files containing images of the original handwritten letters and a type written interpretation of each.

You will find some of the text upside down.  This appears to be caused by a flaw in my scanning program.  Simply rotate the particular page you are on to make it readable.  Paper was in shortage during this time so many of the letters were written on one sheet of paper and to more than one person.  Each addressee had their own section to read.  (Note, you will need Adobe Reader in order to view these documents)

December 11, 1861  This is a letter from Isaac to Elizabeth where he laments on joining the army and discusses getting a pair of shoes.

January 17, 1862   In this letter Isaac writes a section directly to his daughter Caroline who is 13 year old at the time.  I appears that she has taken up with someone who Isaac does not approve of.

Letter #2 from Caroline  This letter is to Isaac and Tommy.  Caroline mentions that she is going to be good from now on and will not disappoint her Dad.  It appears that she has done something that needs forgiveness.

Undated letter from Isaac  In this letter to Elizabeth, his wife, Rebecca his sister in law and Rebecca his mother in law he talks about an outstanding loan and the integrity of an officer.

April 6, 1862  This is a link to the hand written document written on three different dates.  April 6, April 25 and April 28, 1862  This is the best description I have seen of every day life as a Union Soldier.

April 6, 1862  This is a link to the typed version of the document above.  This document was created in 1961 by my Grandfather, Harley Sims.  He interpreted the actual letters so it reads better.  During this time Isaac was wounded and on April 28th was writing from the hospital.

April 18, 1862 This is a line to the hand written letter from Elizabeth to Isaac.

April 18, 1862 This is the typed version of the hand written letter above.  In this she mentions that she had sent a letter one week earlier  informing Isaac that his daughter Caroline had gotten sick and that there was bad news.  She goes on to describe what happened to Caroline and mentions a possible cause.  The term "mortification" is used.  It seems that Caroline was concerned about going to heaven.

I do not have the earlier letter with the original news concerning Caroline.

May 25, 1862 A letter from Isaac and Tommy to Elizabeth.  It is obvious that he is really missing Lil.

June 9, 1862  A letter from Elizabeth to Isaac and Tommy.  It is obvious that she is really missing Isaac's company. There is also a discussion about a deed and money.

June 15, 1862  A letter from Isaac and Tommy to Elizabeth from the hospital.  It appears to be some time since Isaac was wounded.

February 24, 1865 A letter from Tommy to his parents Elizabeth and Isaac.  He is now in the 73 Regiment

Follis Deed to land in Green County in 1852  Thomas Manville sold land to Elizabeth Follis.  Check out the price she paid.

If someone can determine the location of this land please email me at joesims2@columbus.rr.com

Sims / Follis ancestry information  Information on three generations of Sims' and one of Follis.

Thank you Aunt Catherine Arnold for compiling some of this information.

I also thank my Grandfather, Harley Sims, who passed in 1968 for interpretation of the letters.

I can be contacted for information or questions at joesims2@columbus.rr.com

Return to the Sims Page